The Elecnor Group posted a net profit of EUR 70.9 million on 30 September 2022, 16.5% higher than the figure reported in the same period of the previous year, thereby maintaining the dynamic rate of growth of the previous quarters.

At the close of this period, the Group’s consolidated sales stood at EUR 2,518.4 million, which represents an increase of 20.7% in relation to the first nine months of 2021. Both the domestic market (accounting for 42.2% of the total) and the international market (57.8%) have recorded a remarkable increase of 7.2% and 32.8% respectively.

This upwards trend in the Group’s figures has been made possible by the execution of major projects as part of Elecnor’s business, particularly in Australia, Brazil and Chile, as well as the increased volume of activities related to Services which the Group provides in the United States and in European countries, mainly in Spain and Italy.

In turn, Enerfín has maintained its positive tendency due to energy prices in Spain, as well as the revaluation of the Brazilian real and the Canadian dollar, currencies in which the company’s plants operate in Brazil and Canada. 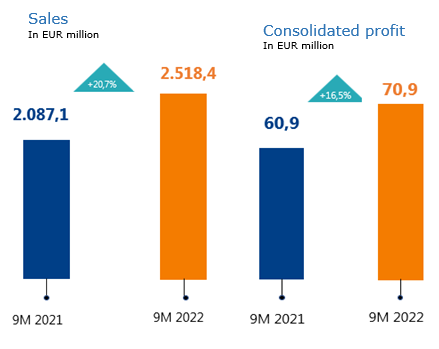 The Group manages its activities through Elecnor (Services and Projects), Enerfín and Celeo (Investments in Infrastructures and Renewable Energy), businesses which mutually complement and reinforce each other. 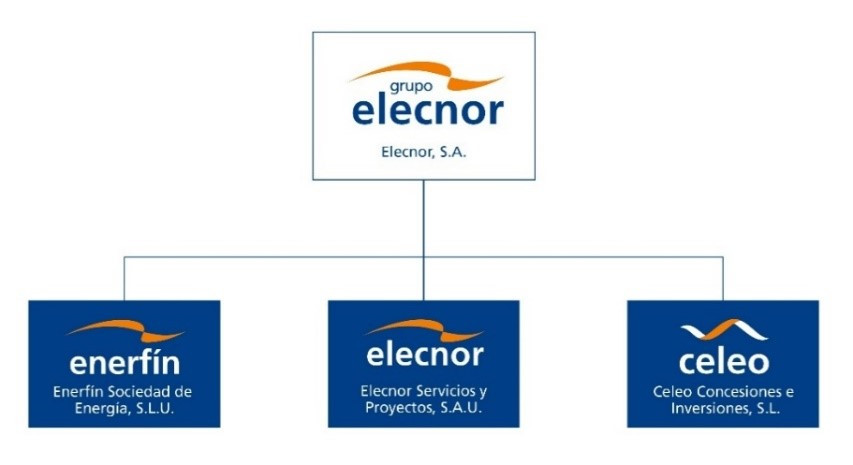 In the domestic market, the pattern of growth in activity has continued due to operations in the energy, telecommunications, water, gas and transport sectors, fields where an essential service is provided to all the utilities. Furthermore, both construction work on wind and solar power farms and the promotion of these farms have also made a contribution to the Group’s sales figures and results, as well as the refurbishment and maintenance projects related to self-consumption and energy efficiency.

In the international market, the positive evolution is mainly due to the projects that the Group has worked on in Australia, the construction of power transmission lines in Brazil and Chile, and also the US subsidiaries (Hawkeye y Belco). The Group’s results have also received contributions from the construction of wind farms in Colombia, solar power plants in the Dominican Republic, hydroelectric power stations in Cameroon and Angola and substations in DR Congo, among many others. Some of these major projects are in the initial stages, which is particularly favourable to an increase in income.

Elecnor’s portfolio of signed contracts still to be executed as of 30 September, and whose execution is planned to happen in the next 12 months, amounts to EUR 2,397.3 million (compared to EUR 2,291.5 million at the end of 2021, thereby maintaining a rising trend between periods). The international market accounts for 72% of this figure and 28% comes from the domestic market. The domestic market portfolio is made up of contracts for activities relating to traditional services, as well as projects for the construction of renewable energy power plants. The international portfolio has increased both in European countries (Italy and the United Kingdom), where activities relating to services are conducted, and in other countries (mainly Australia, the United States and Brazil) where contracts have been awarded for major projects involving the construction of renewable energy power plants and power transmission.

The company has stakes in 1,355 MW of wind energy both in use and under construction in Spain, Brazil and Canada, and will continue its intense promotional activity to ensure its growth and to increase its pipeline, which currently stands at approximately 9 GW in wind and photovoltaic energy projects. Furthermore, it will continue to diversify its activity with projects in storage, hybridisation and hydrogen.

Enerfín ends the first nine months of the year with sales of EUR 155.2 million, 48.4% above the same period in 2021, while Net Profit stands at EUR 23.8 million, 121.5% more than in the equivalent period of the previous year. This positive tendency has been aided, mainly, by wind farms in Spain benefitting from a more favourable production price, compared to the same period of the previous year. In the international sphere, it is worth mentioning the positive evolution of the Brazilian real and the Canadian dollar against the euro, currencies in which the company mainly operates abroad.

Celeo, a company jointly owned and managed with APG, one of the largest pension funds in the world, runs 6,891 km of electricity power transmission lines in Chile and Brazil, and has stakes in 345 MW of renewable energy (photovoltaic) in Spain and Brazil. Of note are the start of work on the first concession in Peru (Puerto Maldonado) and the recent contract awarded for the construction of a power transmission line in Chile. The combination of assets in operation that the company manages represents EUR 5,211 million. During the first nine months of the year, this Branch has posted an attributable consolidated net profit of EUR 16.8 million.

In a breakdown of the business, of importance in the Transmission Networks business run by Celeo, are the start-up of the concession awarded in Serra de Ibiapaba in Brazil at the end of 2021, and the positive evolution of the US dollar and the Brazilian real against the euro, the company’s main functional currencies in Chile and Brazil respectively. In this period, the rise in interest rates for the financing of transmission projects in Brazil has affected the results of this subgroup.

The Elecnor Group, backed by its solid contract portfolio, its diversification both in the company’s activities and geographically, and the good performance of its activity in the first nine months of the year, expects to exceed the figures for sales and results achieved the previous year, in keeping with the tendency of the last decade.

Sustainability at the Elecnor Group comes from its purpose: to generate change and well-being in the territories where it operates. For this reason, it is conscious of the importance of its actions on people and on the environment in which it operates. Its objective is to maximise the positive impacts it has on society and the environment and minimise the negative ones, by means of responsible, ethical and transparent behaviour.

This commitment is inherent in the entire development of the Group’s activities and its business strategy, as well as in its relationship with stakeholders. A commitment which is embodied in its Strategic plan for Sustainability which establishes the key pillars of its social responsibility and the basis and initiatives for continuous improvement in the management of sustainability.

The Elecnor Group is in the process of certification in accordance with the IQNet SR10 standard of Corporate Social Responsibility, which it expects to complete during the year 2022. This seal certifies that the company has all the elements necessary to formalise a sustainability management system, acting as a guarantee of its level of commitment to this issue. More news
x
About us